Hints and tips for making an

A few years ago I was contemplating the purchase of a chimney cowl to prevent rain entering the chimney of my bungalow.

Whilst looking at the various sites selling these devices on the internet, I came to the conclusion that it wouldn't take too much effort to make my own one (and save a few pennies in the process).

When I mentioned to members of my family what I was proposing to do, my daughter asked whether an old frying pan that she was about to throw away would be of any use to the project.

On viewing the article I could see that the size (300mm) would be about right and I noticed that the wooden handle was held into a socket on the pan by means of a long steel rod, with a loop at its far end.
This gave me the idea of suspending the inverted pan from an overhead frame, using the rod to stabilize it.

The rod had a M5 thread at its connecting end, so I drilled and tapped a hole in the centre of the pan to suit, and fitted the rod to it using a couple of nuts on each side to hold it firm.

The Eureka moment came to me when I climbed up onto the roof to check out the cowl, and found out that the pan was an almost perfect fit over the top profile of the chimney pot.
This made me think that it would be an advantage if, instead of having a permanently 'open' chimney pot, the cowl could be made moveable and only be open when the fire was being used, thus preventing heat loss from my bungalow at all other times.

For the first test, I rigged up a couple of support sections from the TV aerial mast that was fixed to the chimney, and suspended the frying pan, via the handle rod, to one of them with a piece of wire, to check the best height to suspend it at in the 'open' position.
I left it suspended in this position for a few days before coming across Snag No. 1, which was that in high winds the pan was being blown about, enough to allow it to swing an edge against the chimney pot, causing quite a lot of noise down below.

I realised that an increased form of stabilisation was needed and decided on fitting a wire mesh sleeve to the pan, slightly smaller than the bore of the chimney pipe, which would have the added advantage of preventing birds getting into the pipe.

I got hold of a sheet of flexible steel mesh, about 600 x 900mm, cut it into 3-separate sections of 600 x 300mm and then rolled up one of these pieces into a tube, just a bit smaller than the 200mm dia bore of the chimney pipe. The remaining pieces of mesh were then coiled inside the first and secured together with interlaced copper wire.

To fit the complete mesh tube to the frying pan, I decided to use some large split pins that were at hand, drilling a series of holes in the pan for them to fit through and bending over the legs at the outside.

Re-fitting the modified cowl in position, and testing for another few days, showed me that the mesh tube idea had solved the noise problem.

Now that I had a quiet cowl, I had to think about the means of effecting its elevation.

At first the idea of a motorised system appealed to me, using a low-voltage motor/gearbox that would winch the cowl up and down by the flick of a switch from down in the comfort of the bungalow. But, when I considered the problems of power supply to the motor (running a cable up to the chimney or remote control with a battery charged by a solar panel) and the need for some form of limit switching plus, of course, weather protection, I decided that a simpler, more reliable mechanical solution would be preferable.

A wire rope and pulley system was the first to spring to mind, but before I started to plan that out, I needed to get rid of the existing TV aerial mast (and reposition it elsewhere), to release the chimney bracket mounts for their new purpose.

A bit of luck came when I was having problems with how to get hold of a 'L' shaped tube of the right size; I happened to spot a pile of steel tubes in my daughter's garden, that had once been the framework of my grandson's garden swing.
They comprised various straight and curved sections of about 28mm diameter, that were originally spigoted/bolted together, so I selected several of these to take home for measuring up.

To avoid the need for repeated climbing up onto my roof to check sizes, etc., I decided to do a complete site survey of the bungalow and chimney in order to construct a computer 3D model, using the free Google SketchUp program that I had worked with for other projects. This allowed me to establish the necessary size and positioning of the framework needed to suspend the chimney cowl directly above the pipe. 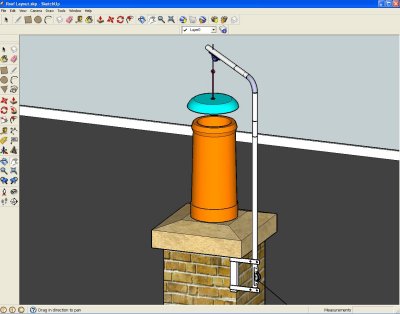 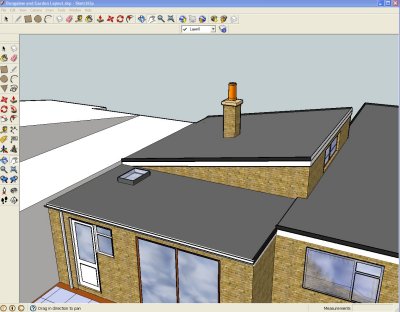 Knowing the exact requirements, I could now construct the 'L'shaped frame from the garden swing tubes with some confidence.
But first I needed a couple of pulleys that would have to be fitted into the tubing; one directly above the chimney pot and another at the exit point from the bottom of the framework.

Having nothing suitable at hand, I had to purchase a pair of sash window frame pulleys from my local Screwfix store which I thought would do the job, and model these up so that I could work out where to make the necessary cut-outs in the tubes.

One other point to be considered was that, as the wire rope was to be running around the bend of the tubular frame, it would need a form of cushioning to prevent it wearing a groove in the steel tubing. So I found an old piece of thick-wall plastic tubing (yellow gas pipe ??) that had the right diameter to fit inside the steel tubing and, with a little heating to make it more pliable, pushed it in position around the curve.

With the pulleys assembled to the support framework, all was now ready for the final installation. But, before purchasing the wire rope that was to be eventually used as the means of hoisting, I thought it would be prudent to do a first test with something already available, which happened to be a combination of electrical wire and gardening string.

Snag No.2 came in the form of stiction in the temporary cord system (probably where it ran over the plastic tube sleeving) and I realised that, to be reliable in rising and lowering, the chimney cowl would need to be heavier than its current 0.8 kg weight.

After a rummage in the garage, I came up with a suitable form of extra weight: a 160mm dia steel gear-ring, weighing around 1.5 kg, which had a handy set of tapped holes that I could use to screw it to the underside of the frying pan.

The improved results that I obtained with the gear-ring fitted gave me the confidence to lash out on 12 metres of 1.6mm dia galvanised wire rope for the final system. 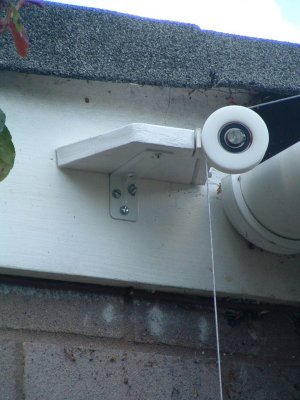 Another pulley was then needed to divert the wire rope from its run across the roof to where the chimney cowl was to be operated from, which was salvaged from the rubbish skip at work and fitted, on an appropriately shaped bracket, to the faschia boarding outside my kitchen door.

All that was left now was to sort out the actual means of operation at ground level. I had thought of an over-centre lever or some form of spring-loaded device, but I finally abandoned these ideas in favour of a simple counterbalance weight system. 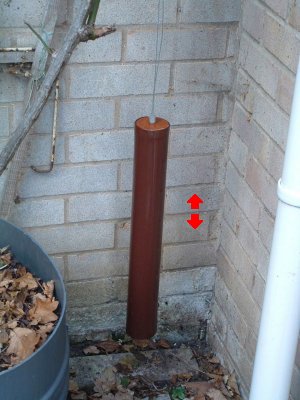 Knowing that the revised chimney cowl weighed about 2.3 kg, I established how much sand I would need to match that weight, then filled up a section of rainwater downpipe with it, to check the length required.

After cutting the downpipe to suit, and making plugs for each end, I fed the free end of the wire rope twice through the downpipe, before adding the sand, and using the metal insert of a large electrical terminal strip to clamp the wire rope ends.

The friction between the wire rope and the plastic sleeve in the bend of the support tube was quite sufficient to maintain the cowl in either of its two positions.

The elevating chimney cowl system has now been in operation for over two years, without the need for any further modifications.

Other than remembering to raise the cowl before lighting the fire (I now have a label on the firelighter to remind me), everything is very straightforward and, although I have no figures on energy saving, I am happy to know that none of my room heat is being sucked up the chimney (venturi fashion) on windy days, when we haven't got the fire going.

Another by-product of the installation I have found is that, because of the relatively close fit of the mesh tube into the chimney, any signs of 'stickiness' when lowering the cowl gives a good indication that the chimney need sweeping (a job that I easily do myself from the roof after simply unhooking the cowl from the wire rope).
Also, in the un-hoped for event of a chimney fire, it should be possible to dampen the blaze by simply lowering the cowl, to stop the build-up of through draught.

If you would like any further information on my method of construction, then please feel free to contact me.

Go to Top of Page